Day 05 of Galapagos – West, Central and East islands on board of the Estrella del Mar by G-Adventures

“Enjoy a morning visit to Punta Espinoza on Fernandina, the youngest of the Galápagos Islands. Witness the large colony of sea lions, marine iguanas, and a variety of birdlife. In the afternoon, travel to Urbina Bay, located at the base of Alcedo Volcano. Keep an eye out for land iguanas.

Punta Espinoza Visit; Punta Espinoza
Tour a number of different trails at this not-to-be-missed landing site that’s home to some of the largest colonies of marine iguanas and sea birds. Follow the path along the beach and across lava flows for a unique opportunity to explore one of the least-visited areas of the Galápagos.

Urbina Bay Visit; Urbina Bay
Visit Urbina Bay for a unique walk among a massive marine reef that was raised out of the water in 1950 during an uplift. See “sculptures” of dried coral and other ocean formations while touring the area on foot. Urbina Bay also offers great opportunities to see land iguanas that have astonishingly yellow skin, flightless cormorants, land tortoises as well as marine turtles and rays.

The night was not as pumpy as promised, we sailed 9 hours around the north cape of isabela island to take anchor in front of Punta Espinoza on Fernandina islands.

The panorama shows 3 of isabela islands volcanos, including wolf volcano, the highest point of Galapagos islands in clouds. 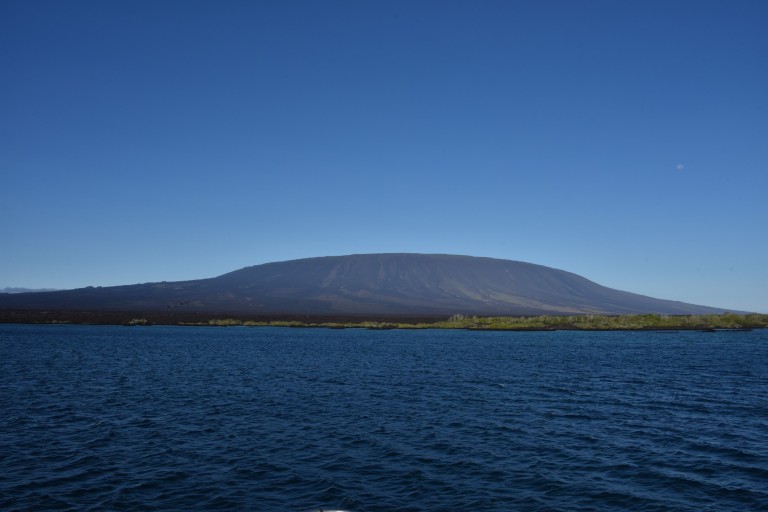 Finally I reached 100 % of oxygen saturation. Would have been laughable, I was told that city people super unlikely reach it.

We get up and have breakfast.

Afterwards we get ready to land on a concrete pier on Fernandina. It is blue sky and warm.

On Fernandina Indira explains the types of mangroves.

We see lots of marine iguanas warming up for the swim on black lava rocks, fur seals, the only species of non flying cormorans nesting, in the world, the endemic primary vegetation of lava Cactus and a skeleton of a whale. 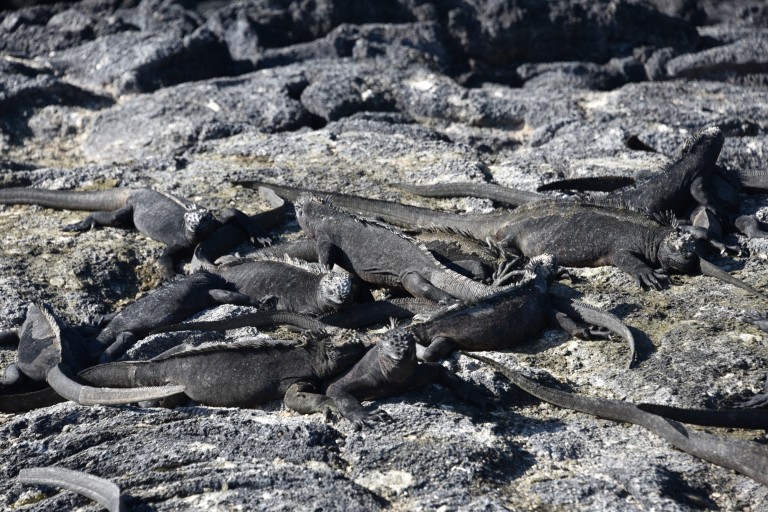 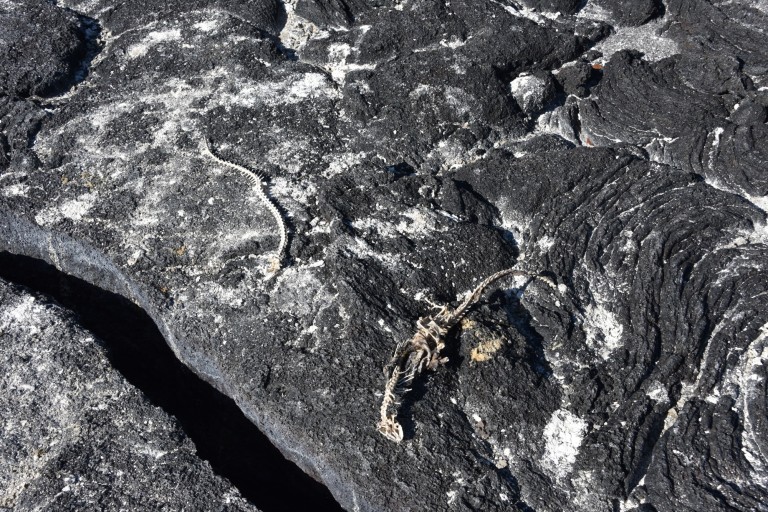 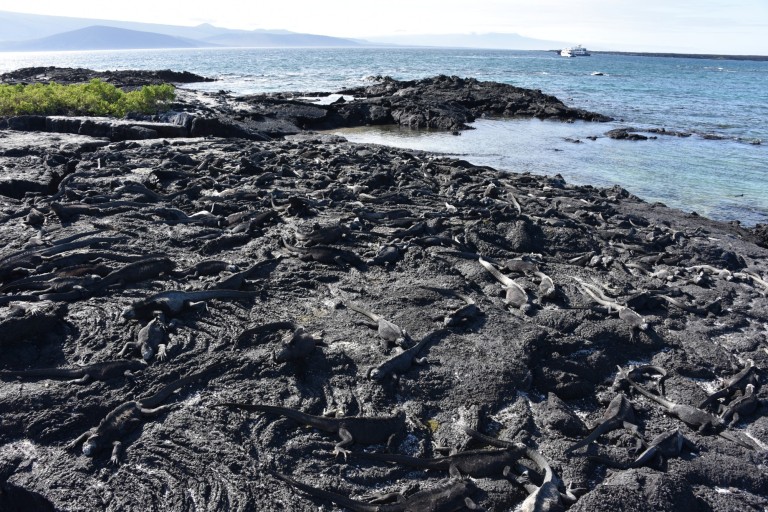 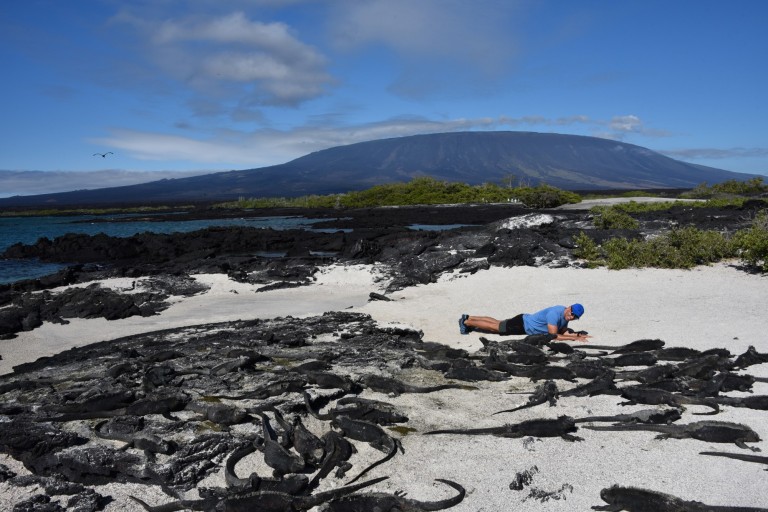 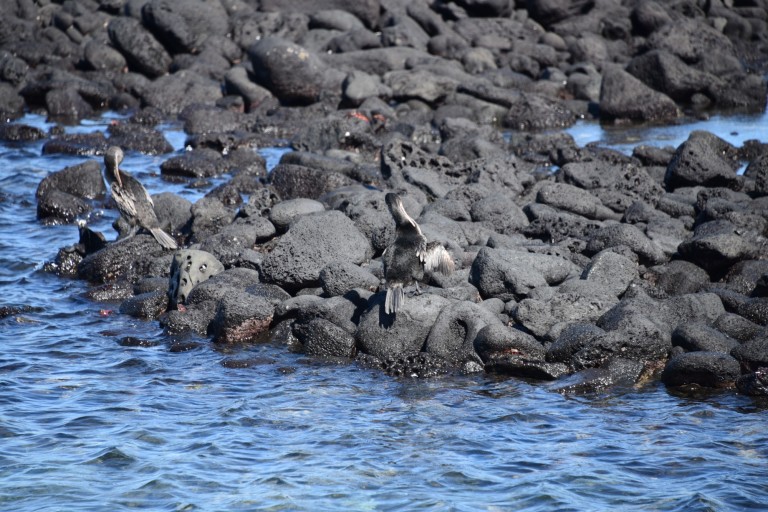 And the third comes to being her a gift. 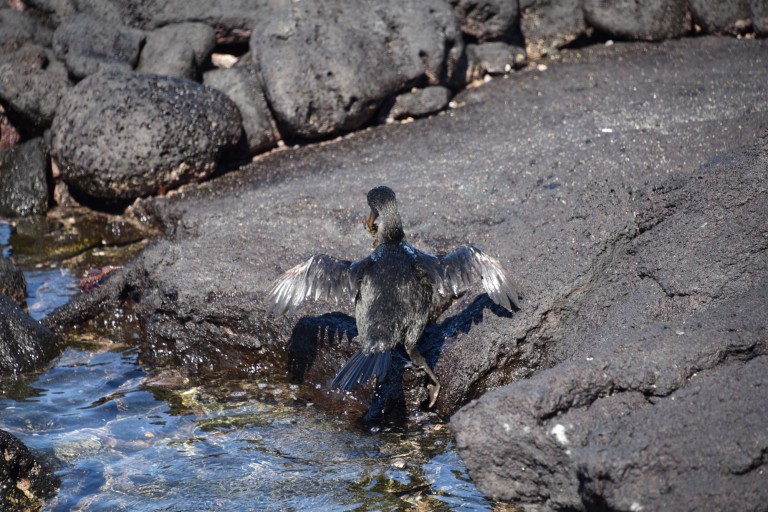 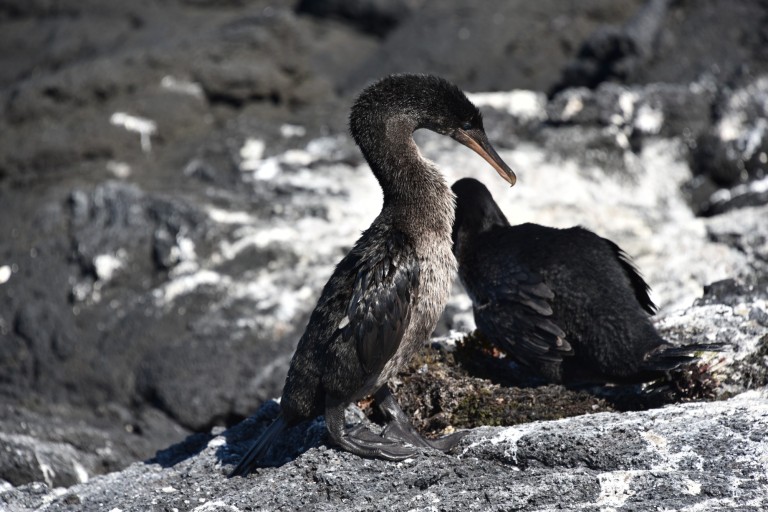 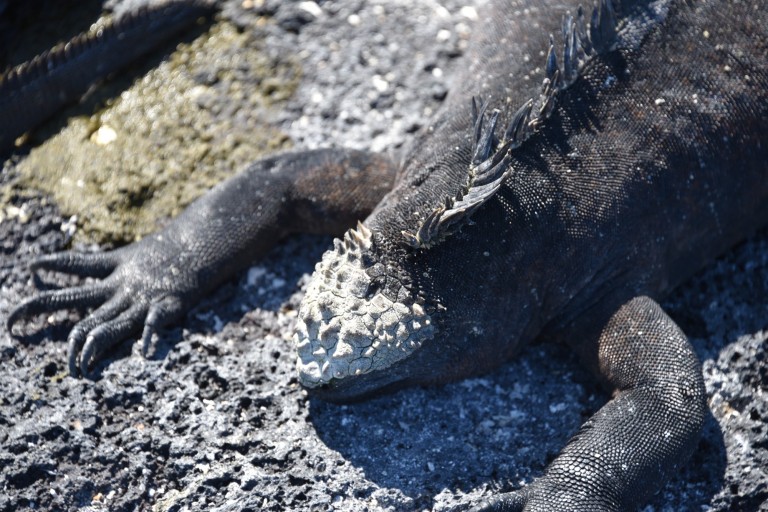 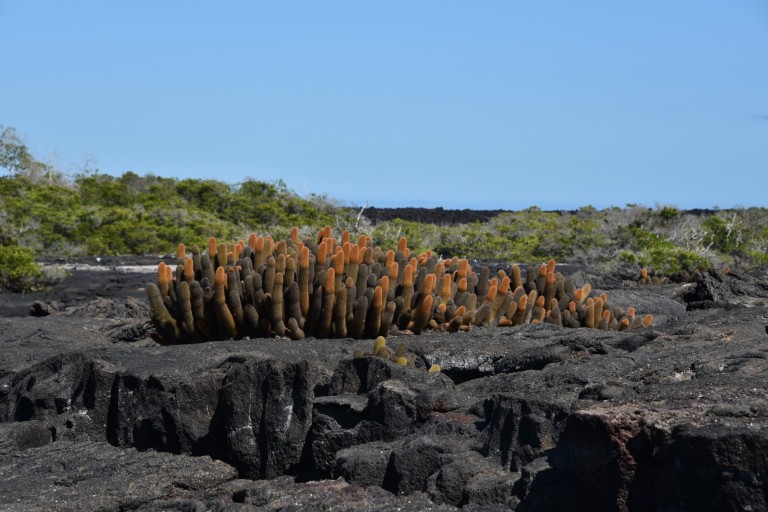 Then we return to the boat, gear up to snorkel.We snorkel for one hour in really cold water. But it is an amazing journey with lots of marine iguanas heated up on the black lava stone before now feeding of the algaes, huge turtles, a juvenile sea lion playing with us and finally three penguins. 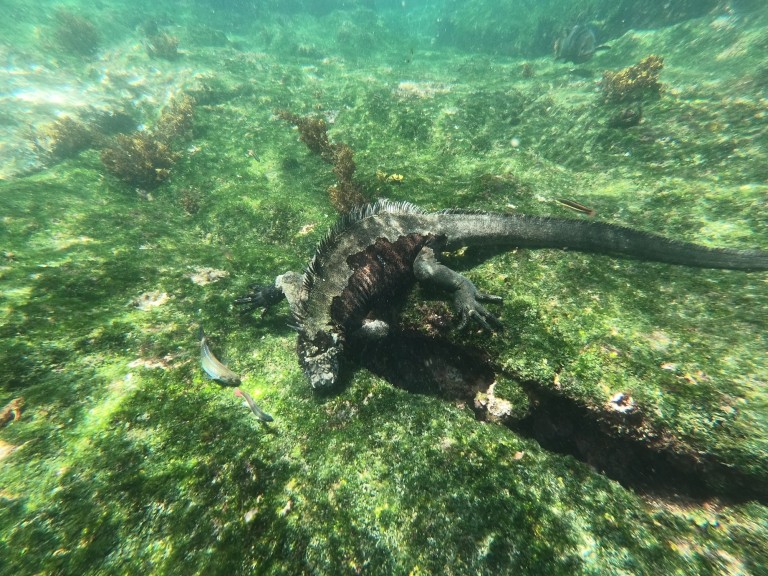 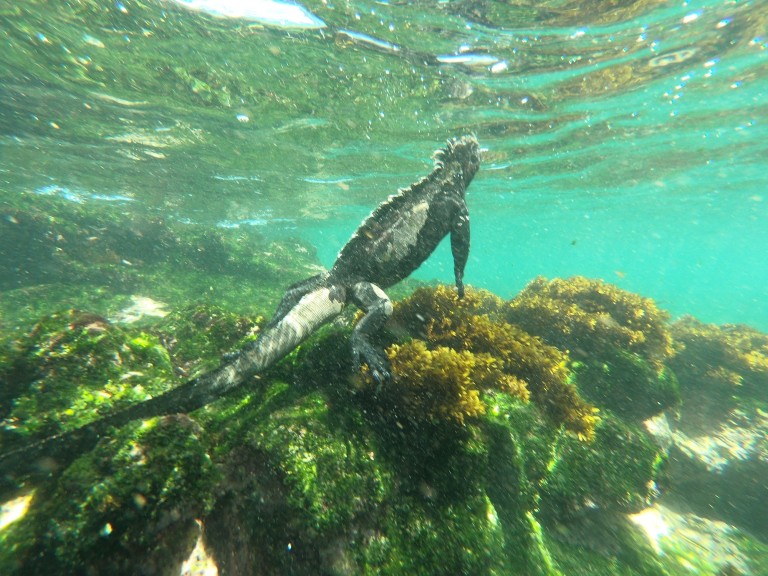 We go out, have a hot shower back on the boat and get lunch.

After lunch we visit Urbina bay on isabela island. We see lots of yellow land iguanas, but unfortunately no land tortoises. As we come back to the beach current did increase heavily and a lot of the snorkeling gear we left there is gone. We dive some 30 mins an recover everything. Then we go back to the boat early. 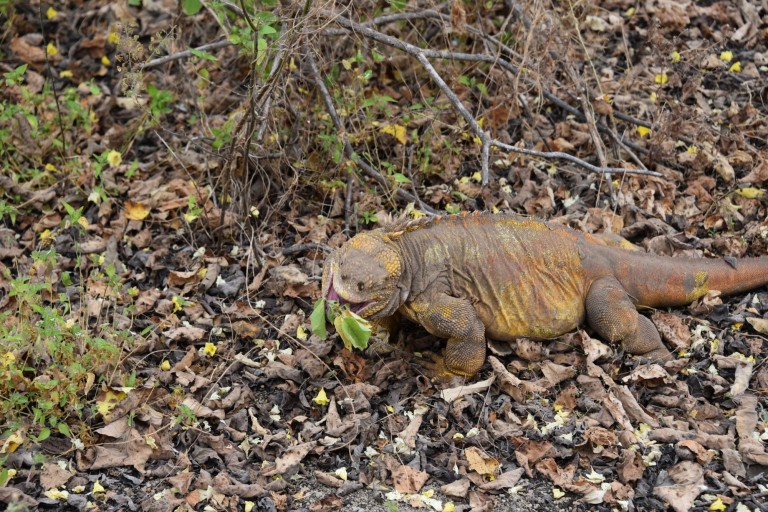 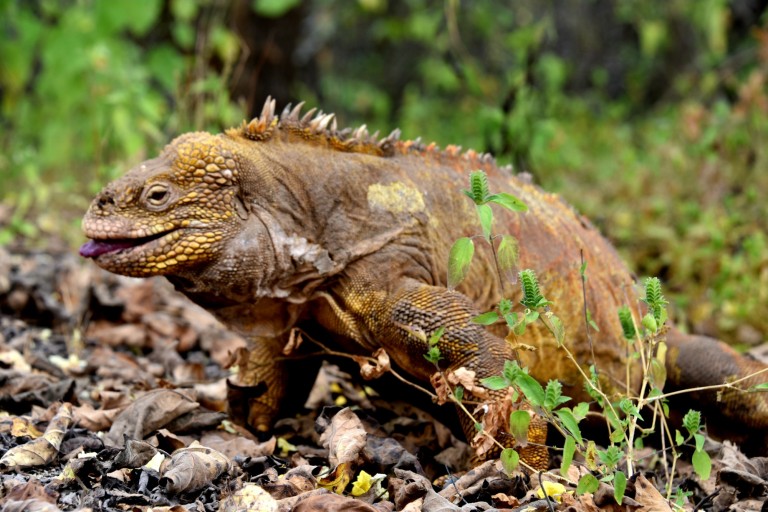 We go back to the boaz, have a hot shower and lie in the sun. Frigate birds follow the board.

Have lunch, Rachel’s birthday. Then we qwirkel.